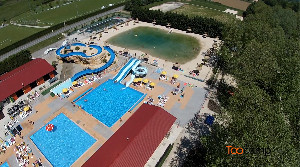 Camping Le Château de Galaure is not available on our site. Compare prices of rentals around the campsite

Our partners do not provide stay on this site. results list (not exhaustive) for1 merchants referenced for a fee surrounding campsites.

very nice campsite .The only problem is the reception: no smiling, no reception, no professionalism. The restoration is commonplace, no holding no cleanliness on the staff except two or three employees. The bar too slow to serve any recommendation. involved.Our congratulations the maintenance and maintenance team.Always listening to the customer and very helpful.Bravo to the young employee who keeps passing check sanitary because they are really very clean, flowery and with music.
> More
Ask a question about the campsite
Thank you for the advice
to report a problem
This review is the subjective opinion of a member Toocamp and not of Toocamp.

disappointing reception, shabby welcome, no dress.RASE TATOUÉE etc. From our arrival, the reception was full of children crying, it was thought that the head receptionist would intervene to at least give an explanation but none of that.We had wait more than an hour without excuse.je not recommend this campsite to French speaking English.ON IS IGNORES AT THE RESTAURANT BAR TO NOT SERVE US.Cooks perspire no hygiene service no one unable to even the world on the terrace waiting. Glasses are hanging on the tables. Bathing unattended a single person not graduated. Thanks for taking people for con
> More
Ask a question about the campsite
Thank you for the advice
to report a problem
This review is the subjective opinion of a member Toocamp and not of Toocamp.

“ A campsite if you are Fancais do not come sighted ”

The Camping Château de Galaure is located in ... Our mobile home was clean limit spring breaks signal to the welcome nothing done during our stay bridge May 15, 2015 The pool or the water park was surreal wait for the sun to heat the water The reception on the campsite was passable The animations were must not be French reserved to the Dutch
> More
Ask a question about the campsite
Thank you for the advice
to report a problem

This review is the subjective opinion of a member Toocamp and not of Toocamp.

“ A campsite .... that francophones must avoid ”

Camping entirely dedicated to the Dutch, before you see that you are French, it goes, after we pretended not to see you on the terrace to not serve you. Mini kids club, your child speaks Dutch you have everything good, if not, proscribed. Explanations of the activities, in Dutch 3 minutes, in French 3 seconds, miss something? So why all in Dutch, because Iris Park, I'm already gone with vacansoleil, but never in an Iris Park, so not disappointed. Staggered schedules compared to the French, normal, they eat at 17:30, in fact the activities begin very early, and we miss everything, we had to adapt then (given that we are more in France)! ! The snack, ah, the snack, you order, it's already complicated, we tell you the price, you do not understand, it's not in French, so we write it to you, but by the way, Chateauneuf de Galaure, what country is it in? The surroundings, nothing or almost, hard to escape from Holland. However, a hat trick to the few French and French working camp (Housekeeping, maintenance), already to support that (we have to live well), because let's be clear, they bar access to clean, they step over, they put a mop to wipe the feet, they pass over, after all, they are paid to clean their shit, and do not talk about floating dung in the lagoon, 5 French families in the camp, it is necessarily us (pigs), at home I'm sure it's clean, so I would like to tell them, you do not like my country, you do not like its inhabitants, so leave it, we will not cry you. That said, they will be for you caring (French employees), they know the ordeal you're going through. that's enough, we could do in novel, Francophone, FUYEZ .Notant, being less than 200 km from home, be on, I would also shit on their beaches. Oupppsss, second note, it seems that it is better not go to see the state of the kitchen, but that I did not see it with my eyes, but it would not surprise me.I want it anyway this year in Vancansoleil not to mention that in its brochure, I would know it in the future. A word, hi.
> More
Ask a question about the campsite
Thank you for the advice
to report a problem
This review is the subjective opinion of a member Toocamp and not of Toocamp.

Camping Château de Galaure is located Chateauneuf du Galaure Our mobile home was well arranged but with missing or broken equipment. We are asked to do the inventory and report, that the list of equipment is in the binder left for the use of vacationers but there is none. It was found that a chair was missing and a knife was broken. We reported to the front desk, they had to come but nothing happened. The pool or water park was very disappointing. The place is beautiful, spacious, but of an abominable hygiene. Unlike other campsites, underpants are allowed, but here it was worse than anything, there was a community of people bathing dressed. Women in skirts, dresses, pants, Bermuda shorts. Children in panties or underpants with a swimsuit on top. Some ate or drank in the water. There is no supervision, no lifeguards. the big slide has become unusable for the children, because some blocked the accesses or left the toboggan in full course to hide in the plastic rocks. Race results: disappointed children, parents forced to police, and children injured. There was 1 hour on Sunday a lifeguard but Dutch, so without any conversation possible. The private beach has dubious water, rather green than blue, and one of our children came out with button plaques. Coincidence or not? The welcome on the campsite was normal. The person has the home being the only one who speaks French. All the rest of the staff are Dutch, without them knowing a word of French. If you do not speak English, it will become unlivable, because you can not order at the bar, do your little shopping, leave your children to the kids club, participate in evening entertainment etc ... The animations were void because of the barrier of the language. No need to go there if you do not understand Dutch or if you do not speak English. Nothing is done for the French ... The setting seems idyllic on the site, but this campsite is really too dirty to spend a pleasant stay. It's too bad.
> More
Ask a question about the campsite
Thank you for the advice
to report a problem
This review is the subjective opinion of a member Toocamp and not of Toocamp.
>Read all reviews

“ HOW TO HIDE HOLIDAYS ”

Camping DUTCH what a surprise in bad taste. The whole campsite: the staff, the reception, the children's clubs, the excursions, the bike rentals and so on and of the best, all this small world is DUTCH. We really thought we were wrong destination. WiFi paid but down (20 euros lost) and excuses every day but no refund, just a poster after that he no longer sold a package because it was down. Our children also disappointed to be unable to go to the kids club because of the language barrier (we had chosen this campsite for their famous super "camping kid"
> More
Ask a question about the campsite
Thank you for the advice
to report a problem
This review is the subjective opinion of a member Toocamp and not of Toocamp.

We wondered if we were in France not a word of French, even to welcome it. NEVER MORE.PUB MENSSONGERE. Thank you to the maids for the few information.
> More
Ask a question about the campsite
Thank you for the advice
to report a problem
This review is the subjective opinion of a member Toocamp and not of Toocamp.

ADVERTISING MENSONGERE: no French camper, which is of course not indicated on the site or booking! Entertainment (and hosts) dutch, bar for Dutch including television (long live the Olympics). Contact taken with the director of the site which sends us back to vacansoleil which does not remind us ... Only positive point, the bungalow with quality benefits TO AVOID EXCEPT IF YOU APPRECIAZE HOLLANDE !!!
> More
Ask a question about the campsite
Thank you for the advice
to report a problem
This review is the subjective opinion of a member Toocamp and not of Toocamp.

This campsite is not suitable for French tourists, because everything is done for the Dutch. The reception, the animations, the restaurant. People do not speak French. Except the cleaning staff. Cold showers (if there is water) because when someone flushes the toilets or does the dishes the water in the showers is cut off, sewage problems clogged, smelly odors a pool on chlorinated with certainly developments of chloramines due to the great cleanliness of people. this corner of paradise looks like some place in trench warfare everything is flashy ADVERTISING LITTLE FOR THIS CAMPING
> More
Ask a question about the campsite
Thank you for the advice
to report a problem
This review is the subjective opinion of a member Toocamp and not of Toocamp.

The campsite Château de Galaure is a high-end family campsite located in the Drôme, close to the river. The campsite offers nearly 400 pitches and rentals as well as many activities and activities.

This high-end campsite has an aquatic area with a paddling pool for children with a slide and a water fountain. For older children, there are two swimming pools with water slides and the lazy river, a river of slow swimming. For an optimal relaxation, it is possible to sunbathe on the large terrace which has a view of the pool, spend a little time in the sauna or a little time just for yourself in the massage room.

The campsite Le Château de Galaure is suitable for all members of the family. Toddlers, teens and adults will find their happiness. "Campingforyou" is a program specially designed for teenagers. Through this program, they can meet and challenge themselves in many events and sports tournaments, from petanque tournaments to table tennis and aquatic games. For the little ones (up to 12 years old), a program, the camping Kids, is also available. They can have fun in adventure games, do manual work or even dance at a mini-disco just to them! A program of supervised activities is also set up for toddlers (from 2 to 4 years old). "Camping for two" is THE program set up and designed especially for couples with activities to do in love or between couples: wine tasting, theme nights, yoga or casino nights. For the more adventurous, the adventure program "Camping Adventure" where we go to discover the region by mountain bike, climbing, canoeing or abseiling. Finally, there is the Camping Family program which allows the whole family to gather around various activities and events led by passionate and experienced animators.

Facilities of this site:

By continuing your browsing this site you accept the use of cookies to show that our partners can send you advertisements tailored to your profile and / or your navigation. Read more